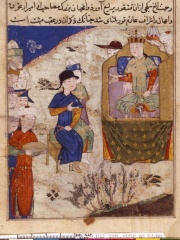 Möngke (Mongolian: ᠮᠥᠩᠬᠡ Möngke / Мөнх Mönkh; Chinese: 蒙哥; pinyin: Ménggē; 11 January 1209 – 11 August 1259) was the fourth khagan of the Mongol Empire, ruling from 1 July 1251, to 11 August 1259. He was the first Khagan from the Toluid line, and made significant reforms to improve the administration of the Empire during his reign. Read more on Wikipedia

Möngke Khan was the grandson of Genghis Khan and the second son of Ögedei Khan. He is famous for being the first Mongol emperor to convert to Islam.

Among politicians, Möngke Khan ranks 1,543 out of 15,710. Before him are Alexios V Doukas, Nicolás Maduro, An Lushan, Yolande de Polastron, Constantine VI, and Felix Yusupov. After him are Nancy Pelosi, Tiberius II Constantine, Æthelred the Unready, Henry II of Navarre, Emperor Ninkō, and Ahmad Sanjar.

Among people born in 1209, Möngke Khan ranks 2. Before him is Berke. After him are Haji Bektash Veli, Sancho II of Portugal, and Richard of Cornwall. Among people deceased in 1259, Möngke Khan ranks 1. After him are Christopher I of Denmark, Gojong of Goryeo, Matilda II, Countess of Boulogne, Henry of Latvia, Al-Mansur Ali, Thomas, Count of Flanders, and Matthew Paris.