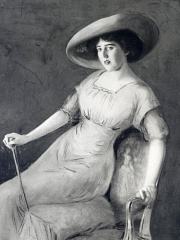 Louise Bryant (December 5, 1885 – January 6, 1936), an American feminist, political activist, and journalist, became best known for her sympathetic coverage of Russia and the Bolsheviks during the Russian Revolution of November 1917. Bryant, who married fellow journalist John Reed (her second husband) in 1916, wrote about Russian leaders such as Katherine Breshkovsky, Maria Spiridonova, Alexander Kerensky, Vladimir Lenin, and Leon Trotsky. Her news stories, distributed by Hearst during and after her trips to Petrograd and Moscow, appeared in newspapers across the United States and Canada in the years immediately following World War I. A collection of articles from her first trip was published in 1918 as Six Red Months in Russia. Read more on Wikipedia

Since 2007, the English Wikipedia page of Louise Bryant has received more than 433,851 page views. Her biography is available in 20 different languages on Wikipedia making her the 275th most popular social activist.