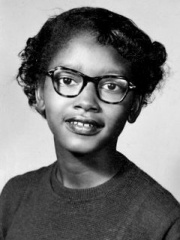 Claudette Colvin (born September 5, 1939) is a retired American nurse aide who was a pioneer of the 1950s civil rights movement. On March 2, 1955, she was arrested at the age of 15 in Montgomery, Alabama, for refusing to give up her seat to a white woman on a crowded, segregated bus. This occurred nine months before the more widely known incident in which Rosa Parks, secretary of the local chapter of the NAACP, helped spark the 1955 Montgomery bus boycott.Colvin was one of five plaintiffs in the first federal court case filed by civil rights attorney Fred Gray on February 1, 1956, as Browder v. Read more on Wikipedia

Since 2007, the English Wikipedia page of Claudette Colvin has received more than 1,368,261 page views. Her biography is available in 15 different languages on Wikipedia making her the 345th most popular social activist.