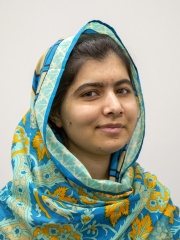 Malala Yousafzai (Pashto pronunciation: [məˈlaːlə jusəf ˈzəj]; born 12 July 1997), often referred to mononymously as Malala, is a Pakistani activist for female education and the youngest Nobel Prize laureate. She is known for human rights advocacy, especially the education of women and children in her native Swat Valley in Khyber Pakhtunkhwa, northwest Pakistan, where the local Tehrik-i-Taliban Pakistan had at times banned girls from attending school. Her advocacy has grown into an international movement, and according to former Pakistani Prime Minister Shahid Khaqan Abbasi, she has become "the most prominent citizen" of the country.The daughter of educational activist Ziauddin Yousafzai was born to a Pashtun family in Mingora, Khyber Pakhtunkhwa, Pakistan. Read more on Wikipedia

Among SOCIAL ACTIVISTS In Pakistan