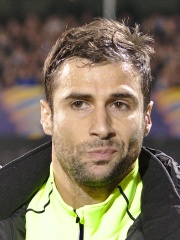 Lorik Agim Cana (Albanian pronunciation: [ˈlɔɾik ˈtsana]; born 27 July 1983) is an Albanian former professional footballer. He is currently the Grassroots ambassador for children's football in Albania, named by the Albanian Football Association on 26 October 2017. Cana played in the top divisions of France, England, Italy and Turkey, representing Paris Saint-Germain, Sunderland, Galatasaray, Lazio, FC Nantes and Olympique de Marseille as well as the Albanian national team for which he held the appearance record for Albania's most capped player of all time, with 93 caps since he made his debut in 2003 until his retirement in 2016. Read more on Wikipedia

Since 2007, the English Wikipedia page of Lorik Cana has received more than 613,038 page views. His biography is available in 47 different languages on Wikipedia (up from 45 in 2019). Lorik Cana is the 3,111th most popular soccer player (down from 2,546th in 2019), the 22nd most popular biography from Kosovo and the 4th most popular Soccer Player.

Others born in Kosovo

Among SOCCER PLAYERS In Kosovo