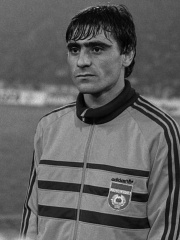 Fadil Avdullah Vokrri (Serbo-Croatian: Fadilj Avdulah Vokri July 1960 – 9 June 2018) was a Yugoslav and later Kosovan football administrator and player. Arguably one of the greatest Kosovan footballers, he was the president of the Football Federation of Kosovo from 16 February 2008 until his death on 9 June 2018. Read more on Wikipedia

Among politicians, Fadil Vokrri ranks 13,221 out of 15,710. Before him are Kessai Note, Keiko Fujimori, Emil Jónsson, James Wilson, Wehha of East Anglia, and Ivar Lykke. After him are Leónidas Plaza, Aleqa Hammond, Rodney Mullen, Cailtram, Salman, Crown Prince of Bahrain, and Wasim Sajjad.