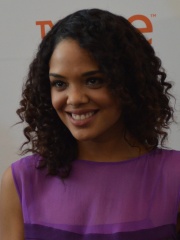 Tessa Lynne Thompson (born October 3, 1983) is an American actress. She began her professional acting career with the Los Angeles Women's Shakespeare Company while studying at Santa Monica College. She appeared in productions of The Tempest and Romeo and Juliet, the latter of which earned her a NAACP Theatre Award nomination. Read more on Wikipedia

Among actors, Tessa Thompson ranks 4,037 out of 10,030. Before her are Lorella De Luca, Anne Revere, David A. R. White, Bonnie Bartlett, Jacinda Barrett, and May McAvoy. After her are Hill Harper, Blanca Suárez, Harold Perrineau, Daniela Romo, Andrey Makarevich, and Barry Van Dyke.