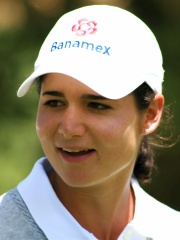 Lorena Ochoa Reyes (Spanish: [loˈɾena oˈt͡ʃoa] (listen); born 15 November 1981) is a former Mexican professional golfer who played on the U.S.-based LPGA Tour from 2003 to 2010. She was the top-ranked female golfer in the world for 158 consecutive and total weeks (both are LPGA Tour records), from 23 April 2007 to her retirement in 2 May 2010, at the age of 28 years old. As the first Mexican golfer of either gender to be ranked number one in the world, she is considered the best Mexican golfer and the best Latin American female golfer of all time. Read more on Wikipedia

Since 2007, the English Wikipedia page of Lorena Ochoa has received more than 350,226 page views. Her biography is available in 20 different languages on Wikipedia making her the 14th most popular golfer.

Among GOLFERS In Mexico