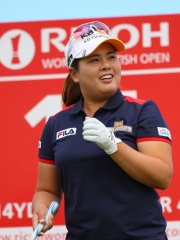 Inbee Park (Korean: 박인비; Hanja: 朴仁妃, pronounced [pɐɡinbi] or [pɐk̚] [inbi]; born 12 July 1988) is a South Korean professional golfer who plays on the LPGA Tour and the LPGA of Japan Tour. She has been the number one ranked player in the Women's World Golf Rankings for four separate runs: April 2013 to June 2014, October 2014 to February 2015, June 2015 to October 2015, and from April to July 2018. Park has won seven major championships in her career, including three consecutive major wins during the 2013 season, becoming only the fourth LPGA Tour player to win three majors in a calendar year. She is the youngest player to win the U.S. Read more on Wikipedia

Among GOLFERS In South Korea