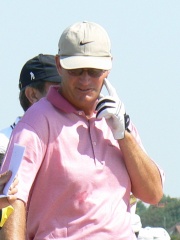 Alexander Walter Barr Lyle (born 9 February 1958) is a Scottish professional golfer. Lyle has won two major championships during his career. Along with Nick Faldo and Ian Woosnam, he became one of Britain's top golfers during the 1980s. Read more on Wikipedia

Since 2007, the English Wikipedia page of Sandy Lyle has received more than 378,583 page views. His biography is available in 16 different languages on Wikipedia making him the 14,200th most popular golfer.