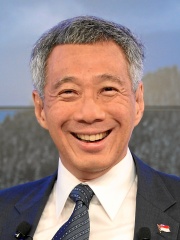 Lee Hsien Loong (Chinese: 李显龙; pinyin: Lǐ Xiǎnlóng; born 10 February 1952) is a Singaporean politician and former brigadier-general who has been serving as Prime Minister of Singapore and Secretary-General of the People's Action Party since 2004. He has been the Member of Parliament (MP) representing the Teck Ghee division of Ang Mo Kio GRC since 1991, and previously Teck Ghee SMC between 1984 and 1991. Born in Singapore during British colonial rule, Lee is the eldest son of Singapore's first prime minister, Lee Kuan Yew. Read more on Wikipedia

Among politicians, Lee Hsien Loong ranks 3,648 out of 15,577. Before him are Blanche II of Navarre, Emperor Tenmu, Antiochus XI Epiphanes, Tudḫaliya IV, Godigisel, and Sultan Husayn. After him are Shirkuh, Childebert the Adopted, Mihailo Obrenović, Pekahiah, Al-Hakam I, and Jani Beg.