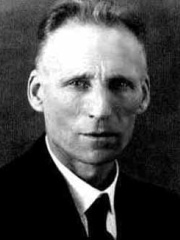 Luitzen Egbertus Jan Brouwer (; Dutch: [ˈlœy̯tsə(n) ɛɣˈbɛrtəs jɑn ˈbrʌu̯ər]; 27 February 1881 – 2 December 1966), usually cited as L. E. J. Brouwer but known to his friends as Bertus, was a Dutch mathematician and philosopher, who worked in topology, set theory, measure theory and complex analysis. He is known as the founder of modern topology, particularly for establishing his fixed-point theorem and the topological invariance of dimension.Brouwer also became a major figure in the philosophy of intuitionism, a constructivist school of mathematics in which math is argued to be a cognitive construct rather than a type of objective truth. This position led to the Brouwer–Hilbert controversy, in which Brouwer sparred with his formalist colleague David Hilbert. Read more on Wikipedia

L.E.J. Brouwer was a Dutch mathematician and one of the founders of topology. He is most famous for the Brouwer fixed point theorem, which states that any continuous function from a compact convex set into itself has at least one fixed point.

Among MATHEMATICIANS In Netherlands