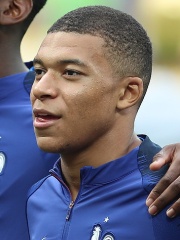 Kylian Mbappé Lottin (born 20 December 1998) is a French professional footballer who plays as a forward for Ligue 1 club Paris Saint-Germain and the France national team. Considered one of the best players in the world, he is renowned for his dribbling abilities, exceptional speed, and finishing.Born in Paris and raised in nearby Bondy, Mbappé began his senior club career in 2015 playing for Monaco, where he won the Ligue 1 title. In 2017, aged 18, Mbappé signed for Paris Saint-Germain on an eventual permanent transfer worth €180 million, making him the second-most-expensive player and most expensive teenage player. Read more on Wikipedia

Kylian Mbappé is a professional footballer who plays as a forward for French club Paris Saint-Germain and the France national team. He is considered one of the best young players in the world, known for his speed, dribbling ability, and finishing. Mbappé rose to prominence as a teenager at Paris Saint-Germain, where he helped the club win four consecutive Ligue 1 titles, as well as the 2018 Coupe de la Ligue and the 2018 Coupe de France. He has also enjoyed success with the French national team, winning the 2018 FIFA World Cup and finishing as the tournament's best young player.