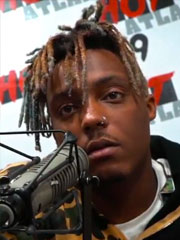 Jarad Anthony Higgins (December 2, 1998 – December 8, 2019), known professionally as Juice Wrld (pronounced "juice world"; stylized as Juice WRLD), was an American rapper, singer, and songwriter from Chicago, Illinois. His song "Lucid Dreams" has been played on the music streaming platform Spotify over one billion times and peaked at number two on the Billboard Hot 100. "Lucid Dreams", along with his earlier hit single "All Girls Are the Same", helped him secure a recording contract with Lil Bibby's Grade A Productions and Interscope Records. Read more on Wikipedia

Among singers, Juice Wrld ranks 2,097 out of 3,541. Before him are Skylar Grey, Linde Lindström, Diego Boneta, Mark E. Smith, Nâdiya, and JB. After him are Sana, Randy Blythe, Crystal Gayle, Azam Ali, Giorgia, and Ida Corr.