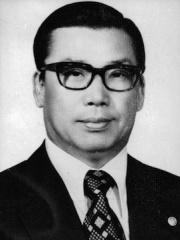 Kim Jae-gyu (Hangul: 김재규, March 6, 1926 – May 24, 1980) was a South Korean politician, army lieutenant general and the director of the Korean Central Intelligence Agency. He assassinated South Korean President Park Chung-hee—who had been one of his closest friends—on October 26, 1979, and was subsequently executed by hanging on May 24, 1980. He remains a controversial figure with many contradictions: he is regarded by some as a patriot who ended Park's 18-year military dictatorship, and by others as a traitor who killed his long-time benefactor out of personal grievance. Read more on Wikipedia

Among politicians, Kim Jae-gyu ranks 4,701 out of 15,710. Before him are Peter Delyan, Georg von Hertling, Tsarevna Catherine Ivanovna of Russia, Mustafa Akıncı, Matilda of England, Duchess of Saxony, and Princess Milica of Serbia. After him are Pim Fortuyn, Ordoño I of Asturias, Charles, Cardinal of Lorraine, Philotas, Francisco de Paula Rodrigues Alves, and Raymond of Burgundy.