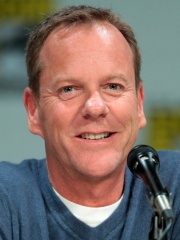 Kiefer William Frederick Dempsey George Rufus Sutherland (born 21 December 1966) is a British-born Canadian actor, producer, and director. He is best known for his starring role as Jack Bauer in the Fox drama series 24 (2001–2010, 2014), for which he won an Emmy Award, a Golden Globe Award, two Screen Actors Guild Awards, and two Satellite Awards. Sutherland got his first leading film role in the Canadian drama The Bay Boy (1984), which earned him a Genie Award nomination. Read more on Wikipedia

Since 2007, the English Wikipedia page of Kiefer Sutherland has received more than 11,619,735 page views. His biography is available in 55 different languages on Wikipedia making him the 1,008th most popular actor.