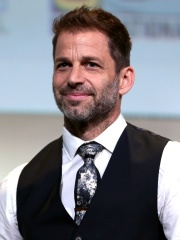 Zachary Edward Snyder (born March 1, 1966) is an American film director, producer, and screenwriter. He made his feature film debut in 2004 with a remake of the 1978 horror film Dawn of the Dead. Since then, he has directed or produced a number of comic book and superhero films, including 300 (2006) and Watchmen (2009), as well as the Superman film that started the DC Extended Universe, Man of Steel (2013) and its follow-ups, Batman v Superman: Dawn of Justice (2016) and Justice League (2017). Read more on Wikipedia

Since 2007, the English Wikipedia page of Zack Snyder has received more than 6,077,847 page views. His biography is available in 40 different languages on Wikipedia making him the 480th most popular film director.