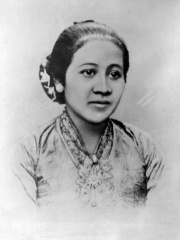 Raden Adjeng Kartini (21 April 1879 – 17 September 1904), also known as Raden Ayu Kartini, was a prominent Indonesian activist who advocated for women's rights and female education. She was born into an aristocratic Javanese family in the Dutch East Indies (present-day Indonesia). After attending a Dutch-language primary school, she wanted to pursue further education, but Javanese women at the time were barred from higher education. She met various officials and influential people, including J.H. Read more on Wikipedia

Page views of Kartinis by language

Among religious figures, Kartini ranks 1,066 out of 2,272. Before her are Jean-Marie Villot, Nicanor the Deacon, Demetrios I of Constantinople, Adhemar of Le Puy, Julian Cesarini, and Nahshon. After her are Margaret of Cortona, Felix of Valois, Muhammad ibn Ya'qub al-Kulayni, Edith Cavell, Francesco Barberini, and Blandina.

Among RELIGIOUS FIGURES In Indonesia

Among religious figures born in Indonesia, Kartini ranks 1. After her are Julius Darmaatmadja (1934) and Ignatius Suharyo Hardjoatmodjo (1950).