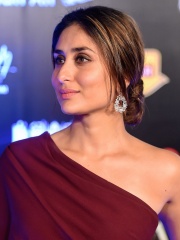 Kareena Kapoor Khan (pronounced [kəˈriːna kəˈpuːr]; née Kapoor; born 21 September 1980) is an Indian actress who appears in Hindi films. She is the daughter of actors Randhir Kapoor and Babita, and the younger sister of actress Karisma Kapoor. Noted for playing a variety of characters in a range of film genres—from romantic comedies to crime dramas—Kapoor is the recipient of several awards, including six Filmfare Awards, and is one of Bollywood's most popular and highest-paid actresses.After making her acting debut in the 2000 war film Refugee, Kapoor established herself with roles in the historical drama Aśoka and the melodrama Kabhi Khushi Kabhie Gham... Read more on Wikipedia