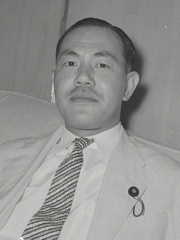 Kakuei Tanaka (田中 角栄 or 田中 角榮, Tanaka Kakuei, 4 May 1918 – 16 December 1993) was a Japanese politician who served in the House of Representatives from 1947 to 1990, and was Prime Minister of Japan from 1972 to 1974. After a power struggle with Takeo Fukuda, he became the most influential member of the ruling Liberal Democratic Party from the mid-1960s until the mid-1980s. He was a central figure in several political scandals, culminating in the Lockheed bribery scandals of 1976 which led to his arrest and trial; he was found guilty by two lower courts, but his case remained open before the Supreme Court through his death. Read more on Wikipedia

Among politicians, Kakuei Tanaka ranks 5,005 out of 15,710. Before him are Hashim Thaçi, Alexander Orlov, Auguste, Duke of Leuchtenberg, Philip II, Anna of Hohenstaufen, and Mohamed Ennaceur. After him are Franz Xaver Schwarz, Francesco IV Gonzaga, Duke of Mantua, Hastings Banda, Cyril Genik, Al-Rashid of Morocco, and Gaius Calpurnius Piso.