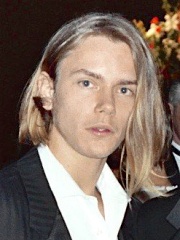 River Jude Phoenix (né Bottom; August 23, 1970 – October 31, 1993) was an American actor, musician, and animal activist. He was the older brother of Rain Phoenix, Joaquin Phoenix, Liberty Phoenix, and Summer Phoenix. Phoenix's work encompassed 24 films and television appearances, and his rise to fame led to his status as a "teen idol". Read more on Wikipedia

Since 2007, the English Wikipedia page of River Phoenix has received more than 16,059,841 page views. His biography is available in 51 different languages on Wikipedia making him the 863rd most popular actor.

Among ACTORS, River Phoenix ranks 863 out of 8,832. Before him are Jim Parsons, Norman Reedus, Jared Harris, Jeroen Krabbé, Til Schweiger, and Johannes Heesters. After him are Simon Baker, Sacha Guitry, Adrienne Lecouvreur, Ann-Margret, Paolo Villaggio, and Chevy Chase.