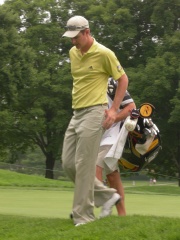 Justin Peter Rose, (born 30 July 1980) is an English professional golfer who plays most of his golf on the PGA Tour, while keeping his membership on the European Tour. He won his first major championship at the 2013 U.S. Open at Merion Golf Club, becoming the first English player to win a major since Nick Faldo in 1996 and the first to win the U.S. Open since Tony Jacklin in 1970. At the 2016 Summer Olympics in Rio de Janeiro, Rose won gold at the men's individual tournament. Read more on Wikipedia

Since 2007, the English Wikipedia page of Justin Rose has received more than 2,601,762 page views. His biography is available in 26 different languages on Wikipedia making him the 15th most popular golfer.

Among GOLFERS In South Africa