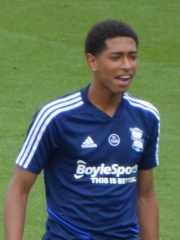 Jude Victor William Bellingham (born 29 June 2003) is an English professional footballer who plays as a midfielder for Bundesliga club Borussia Dortmund and the England national team. Bellingham joined Birmingham City as an under-8, became the club's youngest ever first-team player when he made his senior debut in August 2019, at the age of 16 years, 38 days, and played regularly during the 2019–20 season. Read more on Wikipedia

Independent
Man City vs Dortmund: Pep Guardiola claims referee right to disallow Jude Bellingham goal
Jude Bellingham was controversially denied in the first half of the German side’s 2-1 defeat at the Etihad Stadium
Andy Hampson
Independent
Jude Bellingham ‘frustrated’ by controversial disallowed goal in Champions League defeat to Manchester City
The midfielder was also booked for the tackle - even though he won the ball
Jamie Braidwood
Mirror Online
Jude Bellingham justifies his hype after stepping out of Erling Haaland's shadow
Included in Gareth Southgte's last England squad, Jude Bellingham is in contention for a place in the final 23 for this summer's Euros, on the back of his impressive displays for Borussia Dortmund
[email protected] (David McDonnell)
Daily Mail
Jude Bellingham admits he's 'knackered' after chasing 'world class' Manchester City stars around
The youngster put in an impressive performance but it was not enough to stop City from taking an advantage into the second leg with Phil Foden scoring a 90th minute winner.
Kathryn Batte

Among people born in 2003, Jude Bellingham ranks 18. Before him are Rayan Cherki, Alena Kostornaia, Alireza Firouzja, Lizzy Greene, Quvenzhané Wallis, and Harvey Elliott. After him are Max Charles and JoJo Siwa.