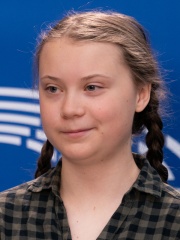 Greta Tintin Eleonora Ernman Thunberg (Swedish: [ˈɡrêːta ˈtʉ̂ːnbærj] (listen); born 3 January 2003) is a Swedish environmental activist who has gained international recognition for promoting the view that humanity is facing an existential crisis arising from climate change. Thunberg is known for her youth and her straightforward speaking manner, both in public and to political leaders and assemblies, in which she criticises world leaders for their failure to take sufficient action to address the climate crisis.Thunberg's activism started after convincing her parents to adopt several lifestyle choices to reduce their own carbon footprint. In August 2018, at age 15, she started spending her school days outside the Swedish parliament to call for stronger action on climate change by holding up a sign reading Skolstrejk för klimatet (School strike for climate). Read more on Wikipedia

Since 2007, the English Wikipedia page of Greta Thunberg has received more than 10,771,016 page views. Her biography is available in 52 different languages on Wikipedia making her the 284th most popular social activist.