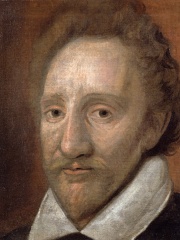 Richard Burbage (c. 1567 – 13 March 1619) was an English stage actor, widely considered to have been one of the most famous actors of the Globe Theatre and of his time. In addition to being a stage actor, he was also a theatre owner, entrepreneur, and painter. Read more on Wikipedia

Among people born in 1567, Richard Burbage ranks 14. Before him are Jacques Clément, Eleanor de' Medici, Willem Schouten, Jindřich Matyáš Thurn, Honoré d'Urfé, and Jacob van Heemskerck. After him are John George I, Prince of Anhalt-Dessau, Thomas Nashe, and Thomas Campion. Among people deceased in 1619, Richard Burbage ranks 14. Before him are Johan van Oldenbarnevelt, Lawrence of Brindisi, Shimazu Yoshihiro, Hieronymus Fabricius, Denis Calvaert, and Marko Krizin. After him are Nicholas Hilliard, Olivier de Serres, Jagat Gosain, and Robert Peake the Elder.