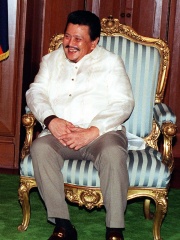 Joseph Ejercito Estrada, (Tagalog: [ɛhɛɹˈsɪtɔ ɛsˈtɾada]; born Jose Marcelo Ejercito; April 19, 1937), also known by the nickname Erap, is a Filipino politician and former actor. He served as the 13th president of the Philippines from 1998 to 2001, the 9th vice president of the Philippines from 1992 to 1998, and the 21st mayor of the City of Manila, the country's capital, from 2013 to 2019. In 2001, he became the first chief executive in Asia to be formally impeached and resigned from power. Read more on Wikipedia

Among politicians, Joseph Estrada ranks 7,702 out of 15,710. Before him are Wo Ding, Grand Duke Andrei Vladimirovich of Russia, Feroze Gandhi, Alcetas I of Epirus, Obelerio degli Antenori, and Neferkare Pepiseneb. After him are Sidney Sonnino, Decimus Junius Brutus Callaicus, Louis of Nassau, Willy Claes, Vlastimir, and Baldomero Espartero.