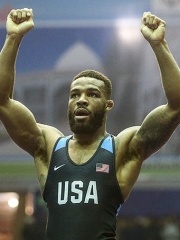 Jordan Ernest Burroughs (born July 8, 1988) is an American freestyle wrestler and graduated folkstyle wrestler who currently competes at 79 kilograms, and notoriously competed at 74 kilos. In freestyle, he was the 2012 Olympic Gold medalist, is the reigning and a five-time World Champion (eight-time medalist), three-time Pan American Games Gold medalist, four-time Pan American champion and four-time US Open National Champion, making the US World or Olympic Team in ten occasions. In folkstyle, Burroughs was a two-time NCAA Division I champion for the Nebraska Cornhuskers and was awarded the Dan Hodge Trophy (equivalent to the Heisman Trophy) in 2012. Read more on Wikipedia