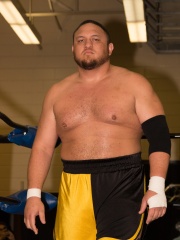 Nuufolau Joel Seanoa (born March 17, 1979), is an American professional wrestler and color commentator, better known by the ring name Samoa Joe. He is currently signed to WWE, where he performs on the Raw brand.Joe was previously known for his time with promotions Total Nonstop Action Wrestling (TNA) and Ring of Honor (ROH). He established himself in ROH from the promotion's beginning in 2002, holding the ROH World Championship for a record 21 months from March 2003 to December 2004. Read more on Wikipedia

Since 2007, the English Wikipedia page of Samoa Joe has received more than 4,394,103 page views. His biography is available in 32 different languages on Wikipedia making him the 159th most popular wrestler.

Among wrestlers, Samoa Joe ranks 161 out of 562. Before him are The Boogeyman, Soslan Andiyev, Jiichiro Date, Teddy Riner, Jeff Jarrett, and Dolph Ziggler. After him are Viscera, Hidehiko Yoshida, Ashley Massaro, Armen Nazaryan, Ilias Iliadis, and Majlinda Kelmendi.