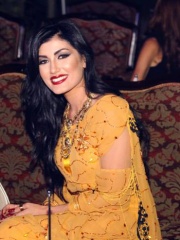 Helan Abdulla (Kurdish: هێلین عەبدوڵڵا; born November 16, 1988), better known by her stage name Helly Luv (ھێلی لەڤ), is a Kurdish singer, dancer, choreographer, actress and model who was born in Urmia, Iran. Her career began by uploading cover videos on social media websites like Myspace and YouTube. Helly Luv has since starred in movies, music videos and has released her own material. Read more on Wikipedia

Since 2007, the English Wikipedia page of Helly Luv has received more than 244,174 page views. Her biography is available in 21 different languages on Wikipedia making her the 7,012th most popular actor.