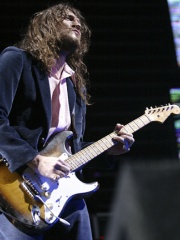 John Anthony Frusciante ( (listen); born March 5, 1970) is an American musician, singer, songwriter, and producer best known as the lead guitarist of the rock band Red Hot Chili Peppers across three stints (1988–1992, 1998–2009, 2019–present). He has recorded five studio albums with them. Frusciante has an active solo career, having released twelve solo albums and seven EPs; his recordings include elements ranging from experimental rock and ambient music to new wave and electronica. Read more on Wikipedia

Since 2007, the English Wikipedia page of John Frusciante has received more than 5,857,091 page views. His biography is available in 44 different languages on Wikipedia making him the 441st most popular musician.