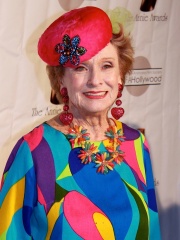 Cloris Leachman (born April 30, 1926) is an American actress and comedian. In a career spanning over seven decades she has won eight Primetime Emmy Awards, a Daytime Emmy Award, and an Academy Award for her role in The Last Picture Show (1971). She was a part of Mel Brooks's ensemble cast, appearing in iconic roles such as Frau Blücher in Young Frankenstein (1974) and Madame Defarge in History of the World, Part I (1981). Read more on Wikipedia

Since 2007, the English Wikipedia page of Cloris Leachman has received more than 5,347,688 page views. Her biography is available in 36 different languages on Wikipedia making her the 1,203rd most popular actor.