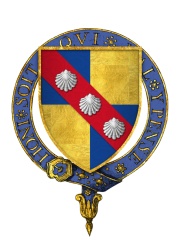 Sir John Fastolf (6 November 1380 – 5 November 1459) was a late medieval English landowner and knight who fought in the Hundred Years' War. He has enjoyed a more lasting reputation as the prototype, in some part, of Shakespeare's character Sir John Falstaff. Read more on Wikipedia

Among people born in 1380, John Fastolf ranks 16. Before him are Itzcoatl, Lidwina, İsa Çelebi, Jalal al-Din Khan ibn Tokhtamysh, Nanni di Banco, and Anna of Cilli. After him are Joseph Albo, Ma Huan, and Sayf ad-Din Inal. Among people deceased in 1459, John Fastolf ranks 7. Before him are Eric of Pomerania, Poggio Bracciolini, Fra Mauro, Ausiàs March, Antoninus of Florence, and Stephen, Count Palatine of Simmern-Zweibrücken. After him are Gregory III of Constantinople and Adolph VIII, Count of Holstein.