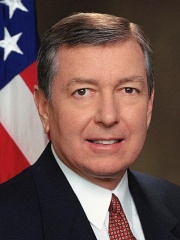 John David Ashcroft (born May 9, 1942) is an American lawyer, songwriter and former politician who served as the 79th U.S. Attorney General (2001–2005), in the George W. Bush Administration. He later founded The Ashcroft Group, a Washington D.C. lobbying firm.Ashcroft previously served as Attorney General of Missouri (1976–1985), and as the 50th Governor of Missouri (1985–1993), having been elected for two consecutive terms in succession (a historical first for a Republican candidate in the state), and he also served as a U.S. Senator from Missouri (1995–2001). He had early appointments in Missouri state government and was mentored by John Danforth. Read more on Wikipedia

Since 2007, the English Wikipedia page of John Ashcroft has received more than 1,200,115 page views. His biography is available in 30 different languages on Wikipedia making him the 12,745th most popular politician.