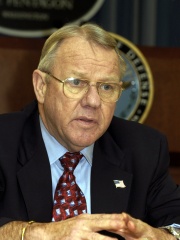 Jay Montgomery Garner (born April 15, 1938) is a retired United States Army lieutenant general who was appointed in 2003 as Director of the Office for Reconstruction and Humanitarian Assistance for Iraq following the 2003 invasion of Iraq but was soon replaced by Ambassador Paul Bremer and the ambassador's successor organization to ORHA, the Coalition Provisional Authority (CPA). Read more on Wikipedia

Among politicians, Jay Garner ranks 12,507 out of 15,710. Before him are Eulalio Gutiérrez, Naplanum, Cecilia of Normandy, Mike Honda, Ameenah Gurib, and Mari Kiviniemi. After him are Eligio Ayala, Said Musa, Gholam-Ali Haddad-Adel, Martin Bangemann, Atifete Jahjaga, and Jóannes Eidesgaard.