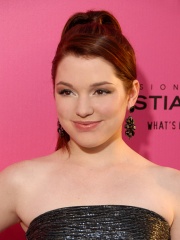 Jennifer Lindsay Stone (born February 12, 1993) is an American actress, who is known for playing Harper Finkle on the Disney Channel series Wizards of Waverly Place, and for her work in various television films, including playing the main character in Harriet the Spy: Blog Wars. Read more on Wikipedia

Since 2007, the English Wikipedia page of Jennifer Stone has received more than 904,814 page views. Her biography is available in 35 different languages on Wikipedia making her the 7,082nd most popular actor.