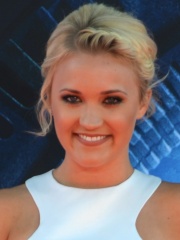 Emily Jordan Osment (born March 10, 1992) is an American actress, singer and songwriter. Born and raised in Los Angeles, Osment began her career as a child actress, appearing in numerous television shows and films, including Biba from Biba Bear (1998-2002), before co-starring as Gerti Giggles in Spy Kids 2: The Island of Lost Dreams (2002) and Spy Kids 3-D: Game Over (2003). She went on to play the role of Lilly Truscott in the Disney Channel television series Hannah Montana (2006–2011) and appeared in the theatrical film based on the series, Hannah Montana: The Movie (2009).Osment appeared as Cassie Keller in the film The Haunting Hour: Don't Think About It (2007), and as Melissa Morris in the Disney Channel television film Dadnapped (2009). Read more on Wikipedia