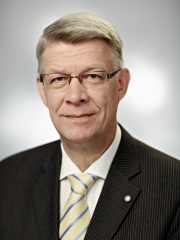 Valdis Zatlers (born 22 March 1955) is a Latvian politician and former physician who served as the seventh president of Latvia from 2007 to 2011. He won the Latvian presidential election of 31 May 2007. Read more on Wikipedia

Since 2007, the English Wikipedia page of Valdis Zatlers has received more than 40,844 page views. His biography is available in 52 different languages on Wikipedia making him the 6,717th most popular politician.

Among politicians, Valdis Zatlers ranks 6,682 out of 14,801. Before him are Yehuda Ashlag, Henry L. Stimson, Conrad I, Count of Auxerre, Publius Vatinius, John A. Macdonald, and Prince Wilhelm of Prussia. After him are Alcetas I of Macedon, Kim Kyu-sik, Anton Korošec, Walter Buch, Neferneferure, and Muhammad Najib ar-Ruba'i.