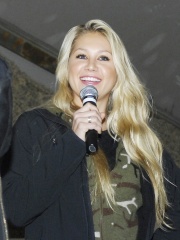 Anna Sergeyevna Kournikova (Russian: А́нна Серге́евна Ку́рникова, IPA: [ˈanːə sʲɪrˈɡʲejɪvnə ˈkurnʲɪkəvə] (listen); born 7 June 1981) is a Russian former professional tennis player and American television personality. Her appearance and celebrity status made her one of the best known tennis stars worldwide. At the peak of her fame, fans looking for images of Kournikova made her name one of the most common search strings on Google Search.Despite never winning a singles title, she reached No. Read more on Wikipedia

Since 2007, the English Wikipedia page of Anna Kournikova has received more than 6,726,004 page views. Her biography is available in 69 different languages on Wikipedia making her the 79th most popular tennis player.

Among TENNIS PLAYERS In Russia