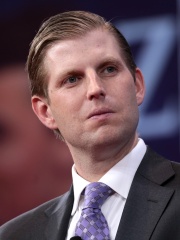 Eric Frederick Trump (born January 6, 1984) is an American businessman, philanthropist, and former reality television personality. He is the third child and second son of President Donald Trump and his first wife, Ivana Trump. A fourth generation businessman (following his great-grandmother Elizabeth, grandfather Fred, and father), he is a trustee and executive vice president of the Trump Organization, running the company alongside his older brother Donald Jr. During their father's presidency, the brothers continued to do deals and investments in foreign countries, as well as collect payments in their U.S. Read more on Wikipedia

Since 2007, the English Wikipedia page of Eric Trump has received more than 13,262,863 page views. His biography is available in 34 different languages on Wikipedia making him the 371st most popular businessperson.