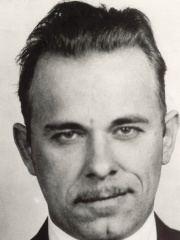 John Herbert Dillinger (; June 22, 1903 – July 22, 1934) was an American gangster active during the Great Depression. He operated with a group of men known as the "Dillinger Gang" or "The Terror Gang" which was accused of robbing 24 banks and four police stations, among other crimes. Dillinger escaped from jail twice. Read more on Wikipedia

Since 2007, the English Wikipedia page of John Dillinger has received more than 7,103,029 page views. His biography is available in 39 different languages on Wikipedia making him the 9th most popular mafioso.

Among mafiosos, John Dillinger ranks 9 out of 45. Before him are Billy the Kid, Jesse James, Lucky Luciano, Salvatore Riina, Bernie Madoff, and Jack Ruby. After him are Frank Abagnale, Velupillai Prabhakaran, Karl Gebhardt, Meyer Lansky, Bernardo Provenzano, and Julius and Ethel Rosenberg.