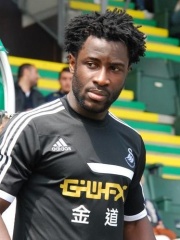 Wilfried Guemiand Bony (born 10 December 1988) is an Ivorian professional footballer who plays as a striker for the Ivory Coast national team and last played for Saudi club Al-Ittihad. Having begun his career at Issia Wazi, Bony moved to Sparta Prague in 2007, helping them to the Czech First League title in 2009–10. In January 2011, he was signed by Dutch club Vitesse, where he was the top scorer in the Eredivisie in 2012–13, leading to a £12 million transfer to Premier League club Swansea City. Read more on Wikipedia

Among people born in 1988, Wilfried Bony ranks 125. Before him are Tarjei Bø, Taison, Changmin, Adam Lallana, Ok Taec-yeon, and Marcel Kittel. After him are He Pingping, Jeffrén Suárez, Andrea Ranocchia, Hayley Williams, Ricky Álvarez, and Jesse Plemons.