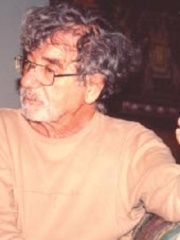 Humberto Maturana Romesín (September 14, 1928 – May 6, 2021) was a Chilean biologist and philosopher, generally known as Humberto Maturana. Many consider him a member of a group of second-order cybernetics theoreticians such as Heinz von Foerster, Gordon Pask, Herbert Brün and Ernst von Glasersfeld. Maturana, along with Francisco Varela and Ricardo B. Uribe, was particularly known for creating the term "autopoiesis" about the self-generating, self-maintaining structure in living systems, and concepts such as structural determinism and structural coupling. Read more on Wikipedia

Among BIOLOGISTS In Chile

Among biologists born in Chile, Humberto Maturana ranks 2. Before him are Hugo Gunckel Lüer (1901). After him are Francisco Varela (1946) and Juan Ignacio Molina (1740).