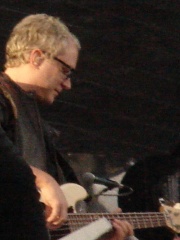 Hugh John McDonald (born December 28, 1951) is an American musician who is best known for his session work and for being the current bassist and backup singer of American rock band Bon Jovi, which he joined as an unofficial member in November 1994, before becoming an official member in 2016. Before joining Bon Jovi, he was the bass guitarist for the David Bromberg Band, touring extensively worldwide and playing on many Bromberg albums. Read more on Wikipedia

Since 2007, the English Wikipedia page of Hugh McDonald has received more than 8,362 page views. His biography is available in 23 different languages on Wikipedia making him the 642nd most popular musician.

Among musicians, Hugh McDonald ranks 642 out of 2,258. Before him are Rachid Taha, Paul Tortelier, Glenn Frey, Walter Gieseking, Willi Boskovsky, and Osvaldo Pugliese. After him are Paco Ibáñez, John Petrucci, András Schiff, Vinnie Vincent, Kid Ory, and David A. Stewart.