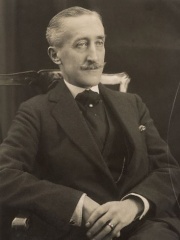 Freeman Freeman-Thomas, 1st Marquess of Willingdon (12 September 1866 – 12 August 1941), was a British Liberal politician and administrator who served as Governor General of Canada, the 13th since Canadian Confederation, and as Viceroy and Governor-General of India, the country's 22nd. Freeman-Thomas was born in England and educated at Eton College and then the University of Cambridge before serving for 15 years in the Sussex Artillery. He then entered the diplomatic and political fields, acting as aide-de-camp to his father-in-law when the latter was Governor of Victoria and, in 1900, was elected to the British House of Commons. He thereafter occupied a variety of government posts, including secretary to the British prime minister and, after being raised to the peerage as Lord Willingdon, as Lord-in-waiting to King George V. Read more on Wikipedia

Since 2007, the English Wikipedia page of Freeman Freeman-Thomas, 1st Marquess of Willingdon has received more than 258,718 page views. His biography is available in 20 different languages on Wikipedia (up from 18 in 2019). Freeman Freeman-Thomas, 1st Marquess of Willingdon is the 13,414th most popular politician (down from 12,389th in 2019), the 4,034th most popular biography from United Kingdom and the 493rd most popular British Politician.