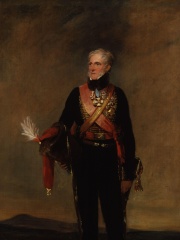 Field Marshal Henry William Paget, 1st Marquess of Anglesey, (17 May 1768 – 29 April 1854), styled Lord Paget between 1784 and 1812 and known as the Earl of Uxbridge between 1812 and 1815, was a British Army officer and politician. After serving as a Member of Parliament for Carnarvon and then for Milborne Port, he took part in the Flanders Campaign and then commanded the cavalry for Sir John Moore's army in Spain during the Peninsular War; his cavalry showed distinct superiority over their French counterparts at the Battle of Sahagún and at the Battle of Benavente, where he defeated the elite chasseurs of the French Imperial Guard. During the Hundred Days he led the charge of the heavy cavalry against Comte d'Erlon's column at the Battle of Waterloo. Read more on Wikipedia

Since 2007, the English Wikipedia page of Henry Paget, 1st Marquess of Anglesey has received more than 229,079 page views. His biography is available in 15 different languages on Wikipedia making him the 12,574th most popular politician.