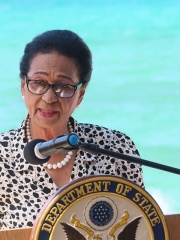 Dame Marguerite Pindling, GCMG ON (née McKenzie; born 26 June 1932) is a former Governor-General of the Bahamas, having served from 8 July 2014 to 28 June 2019. She is also the wife of the late Sir Lynden Pindling, the first Prime Minister of The Bahamas. Read more on Wikipedia

Since 2007, the English Wikipedia page of Marguerite Pindling has received more than 142,102 page views. Her biography is available in 20 different languages on Wikipedia making her the 10,012th most popular politician.

Among politicians, Marguerite Pindling ranks 9,966 out of 14,801. Before her are Salvador Jorge Blanco, Alexandros Nikolopoulos, Thomas of Lancaster, 1st Duke of Clarence, Tiridates I of Parthia, Amastrine, and Gnaeus Mallius Maximus. After her are Demetrios Petrokokkinos, Constantine Lekapenos, Paul Reinecke, Achilles Painter, Gevork Vartanian, and Litokwa Tomeing.

Among people born in 1932, Marguerite Pindling ranks 212. Before her are Atef Ebeid, Karen Demirchyan, Alfred Worden, Jean Stablinski, József Csermák, and Walter Cunningham. After her are Karekin I, Richard Estes, Henri Nouwen, Iskandar of Johor, Albert Collins, and Oreco.