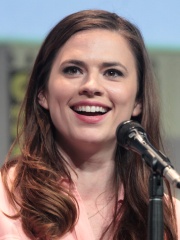 Hayley Elizabeth Atwell (born 5 April 1982) is a British-American actress. Born and raised in London, Atwell studied acting at the Guildhall School of Music and Drama, and made her stage debut in the 2005 play Prometheus Bound. She appeared in multiple West End productions and on television, gaining recognition for her breakthrough role as Elizabeth Cavendish, Duchess of Devonshire in The Duchess (2008), for which she was nominated for a British Independent Film Award for Best Supporting Actress. Read more on Wikipedia

Since 2007, the English Wikipedia page of Hayley Atwell has received more than 8,874,971 page views. Her biography is available in 39 different languages on Wikipedia making her the 3,182nd most popular actor.