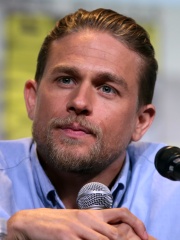 Charles Matthew Hunnam (; born 10 April 1980) is an English actor and screenwriter. He is best known for his roles as Jackson "Jax" Teller on the FX series Sons of Anarchy (2008–2014), for which he was twice nominated for the Critics' Choice Television Award for Best Actor. He is known for playing the title role in Nicholas Nickleby (2002), Pete Dunham in Green Street (2005), Raleigh Becket in Pacific Rim (2013), Alan McMichael in Crimson Peak (2015), Percy Fawcett in The Lost City of Z (2016), the title role in King Arthur: Legend of the Sword (2017), William "Ironhead" Miller in Triple Frontier and Raymond Smith in The Gentlemen (both in 2019). Read more on Wikipedia