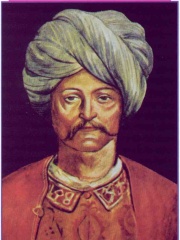 Cem Sultan (December 22, 1459 – February 25, 1495, pronounced [ˈdʒem sulˈtaːn]; Ottoman Turkish: جم‎, romanized: Cem, Turkish: Cem Sultan, also referred to as Jem Sultan, or Zizim by the French), was a pretender to the Ottoman throne in the 15th century. Cem was the third son of Sultan Mehmed II and younger half-brother of Sultan Bayezid II, and thus a half-uncle of Sultan Selim I of Ottoman Empire. After being defeated by Bayezid, Cem went in exile in Egypt and Europe, under the protection of the Mamluks, the Knights Hospitaller of St. Read more on Wikipedia

Since 2007, the English Wikipedia page of Sultan Cem has received more than 195,205 page views. His biography is available in 25 different languages on Wikipedia making him the 1,420th most popular politician.

Among politicians, Sultan Cem ranks 1,414 out of 14,801. Before him are Otto of Bavaria, Charles II of Navarre, Hans Fritzsche, Gaston, Duke of Orléans, Elizabeth of Portugal, and Tokhtamysh. After him are Naram-Sin of Akkad, Henry II of Navarre, Chlodio, Phorcys, Totila, and Louis Philippe II, Duke of Orléans.

Among people born in 1459, Sultan Cem ranks 4. Before him are Maximilian I, Holy Roman Emperor, Pope Adrian VI, and Muhammad XII of Granada. After him are Martin Behaim, Lorenzo di Credi, Jakob Fugger, Charles, Count of Angoulême, John I Albert, Cima da Conegliano, Hersekzade Ahmed Pasha, and Michael Sittow. Among people deceased in 1495, Sultan Cem ranks 2. Before him is John II of Portugal. After him are Seongjong of Joseon, Alfonso II of Naples, Cosimo Tura, Francis, Count of Vendôme, Dorothea of Brandenburg, Jacob Sprenger, Cecily Neville, Duchess of York, Magdalena of France, Elizabeth Tudor, and Vlad Călugărul.