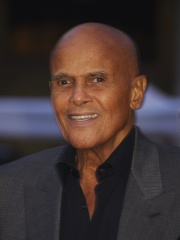 Harry Belafonte (born Harold George Bellanfanti Jr.; March 1, 1927) is an American singer, activist, and actor. As arguably the most successful Jamaican-American pop star, he popularized the Trinbagonian Caribbean musical style with an international audience in the 1950s. His breakthrough album Calypso (1956) was the first million-selling LP by a single artist.Belafonte is best known for his recordings of "The Banana Boat Song", with its signature "Day-O" lyric, "Jump in the Line", and "Jamaica Farewell". Read more on Wikipedia

Harry Belafonte is most famous for being a singer, an actor, and a social activist.